The Benefits of Yoga

Yoga ABC’s is the perfect way to get kids to learn their letters, practice attentive breathing, and learn mindfulness. Practicing yoga has been found to have many benefits on children’s physical and mental health. Basic yoga activities promote self-regulation of emotions and behavior, and gives children a positive outlet for their physical energy. Daily yoga time also increases children’s sense of stability. Age appropriate yoga teaches young children body awareness and has been found to improve balance, muscle tone, and motor skills.

These simple yoga poses and letter recognition activities work together as a powerful tool to help shape developing minds. 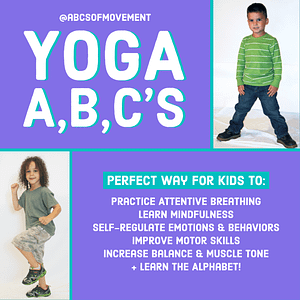 The only thing this lesson requires is the ABC’s of Movement® activity cards.

The front of the  cards contain a full color photograph of a child demonstrating each letter movement. The back of the cards have instructions for phonological awareness, sky writing, a rhyming sentence, an alliteration sentence, performance instructions, and modifications for children with special needs. See our “What’s on the ABC’s of Movement Activity Cards” post to learn more. Our activity cards are also available to download online as a pdf.

While the ABC’s of Movement® activity cards focus on moving around in your space, yoga ABC’s encourages children to perform poses. There is no need for perfection when doing yoga poses. Yoga should be non-judgmental and non-competitive. This activity can be done at home, in the classroom, outdoors, and in group settings How do you teach each yoga pose? A large portion of our alphabet cards are animal poses which allow preschoolers to tap into their creativity and dig further into their imagination.

Each Pose is Associated With a Different Letter of the Alphabet 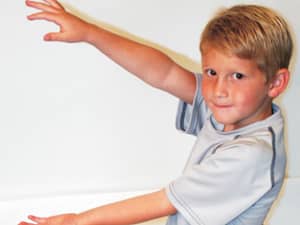 For example, after children identify the letter “A”, they perform alligator arms. While standing stationary, children slowly open and close their arms to represent an alligator’s mouth. They are encouraged to breathe slowly in and out while paying mindful attention to their breathing. Breathing is the most powerful tool to calm and relax our mind and body.

As you can see, each ABC’s of Movement® activity card can be transformed into a yoga pose. Each card also contains suggestions on how you can modify the poses as needed making it an activity for children of all abilities. Let your kids enjoy the yoga and be creative with their own poses. Why not make family yoga time an active alphabet learning activity?

Log In | Become An Affiliate Copyright © 2020 ABCs of Movement. All Rights Reserved. Powered by Slate-Tech